The Significance of Srila Prabhupada 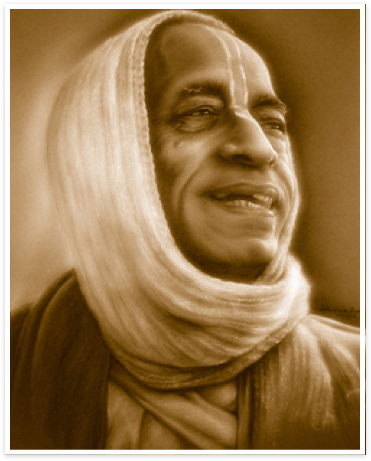 In Srimad-Bhagavatam (1.5.11), Vyasadeva states that the Bhagavatam “is meant to bring about a revolution in the impious life of a misdirected civilization.” This statement clearly refers to the preaching mission heralded by Srila A.C. Bhaktivedanta Swami Prabhupada, whose purports on Srimad-Bhagavatam, composed five thousand years after Srila Vyasadeva’s compilation of the Bhagavatam, have become the most important contribution for the revolutionary respiritualization of the entire human society, which was lost in the darkness of materialism.

Lord Caitanya Mahaprabhu also predicted that His holy name would be broadcast in every town and village of the world. Acaryas of His sampradaya predicted that the spread of Krsna consciousness would usher in a ten-thousand year Golden Age within the dark age of Kali. And in Caitanya Mangala, Locana dasa Thakura foretold that a great senapati (military general) would appear to widely and powerfully preach Lord Caitanya’s message. That confidential task of spreading Krsna consciousness all over the world was entrusted to His Divine Grace A.C. Bhaktivedanta Swami Prabhupada.

Sri Caitanya-caritamrta confirms that unless one is specifically empowered by Krsna, he cannot infuse Krsna consciousness into the hearts of the masses. Bhaktivinoda Thakura, a great Vaisnava acarya who appeared in the nineteenth century, predicted that very soon a great personality would appear and spread Krsna consciousness all over the world. That person is clearly His Divine Grace A.C. Bhaktivedanta Swami Prabhupada.

Bhaktivinoda Thakura also said that the greatness of a Vaisnava can be understood by seeing how many nondevotees he converts to Vaisnavism. To bring even a highly qualified person to Krsna consciousness is difficult, but Srila Prabhupada was so empowered by Krsna that he went amongst the most unlikely candidates — the hedonistic youth of the Western countries — and made devotees by the thousands. No one can fully understand the extraordinary task Srila Prabhupada performed. He went alone amongst persons with no standard of Vedic culture, persons brought up in a society which vigorously promotes meat-eating, illicit sex, gambling, and intoxication. They had no idea how to receive a sadhu and were almost completely disqualified as candidates for spiritual life.

Srila Prabhupada not only entered amongst such people, but gradually managed to train many of them to the extent that now they are accepted everywhere as first-class Vaisnavas and preachers, qualified to impart Krsna consciousness to others.

In India’s recent history, there were certainly many Vaisnavas who were devoted, learned, and renounced. However, the fact remains that only Srila Prabhupada was sufficiently qualified to spread Krsna consciousness all over the world. Only he had sufficient faith in the instructions of Lord Caitanya, the order of his spiritual master, and the holy name of Krsna to seriously attempt spreading Krsna consciousness outside of India. Only he had enough compassion and vision to preach the message of Lord Caitanya to those who most needed it. Only one of the topmost confidential devotees of Krsna could perform such an extraordinary task. By his unparalleled achievements, it is clear that Srila Prabhupada occupies a unique position in the history of Vaisnavism.

Srila Prabhupada personally oversaw the expansion and development of ISKCON. He personally set up the programs which were to form the basis of ISKCON’s continued expansion: production and distribution of transcendental books, harinama-sankirtana parties, temples, ashrams, prasada distribution, transcendental farm communities, gurukulas, preaching to scientists and scholars, and so on.

Srila Prabhupada’s success is itself proof that his endeavors are approved, ordained, and blessed by the Supreme Lord Krsna Himself.

Srila Prabhupada gave many instructions, but certain ones are absolutely necessary for initiated disciples to follow if they claim to be genuine and serious followers of Prabhupada. For instance, Srila Prabhupada demanded that initiated devotees rise by 4.00 a.m., attend mangala-arati, chant at least sixteen rounds of the maha-mantra every day, and undeviatingly follow the four regulative principles.

All such standards that Srila Prabhupada clearly defined are the standards to be followed in ISKCON. A rightly situated, successful follower of Srila Prabhupada is simply a faithful standard-bearer. He does not try to change or interpret the standards and programs given by Prabhupada, for he knows that whatever Srila Prabhupada has given us is perfect and complete for the respiritualization of the entire human society — not only for the present, but for the next ten thousand years.